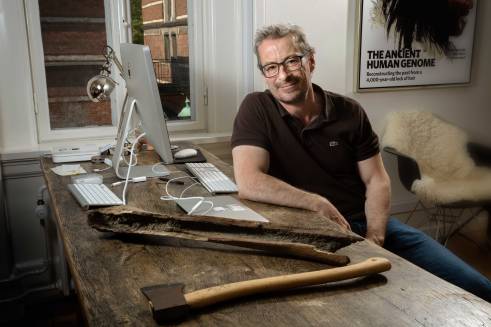 The University of Alaska Fairbanks is accustomed to attracting non-traditional students – folks who return to higher education after trying their hand at mining or construction or trapping. As it happens, a celebrated Danish scientist also took a non-direct educational path. Not long ago, the UAF’s Alaska Quaternary Center invited evolutionary geneticist Eske Willerslev to talk on campus. Willerslev got a late start in the sciences after he and his twin brother mounted several expeditions to Siberia. They were looking for adventure and also exploring for keys to the peopling of the new world. But as you’ll hear, when Willerslev took up his career in biology he made astounding progress. He helped pioneer a novel technique for analyzing ancient DNA, and also became the youngest full professor in Denmark at that time.

And Chris Lott is in with false cognates in this edition of Katexic Clippings.